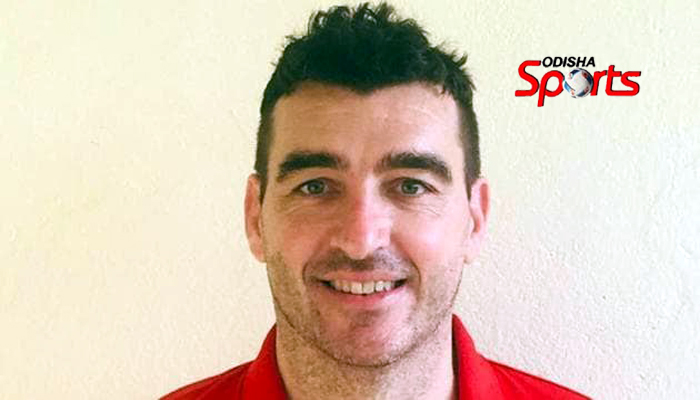 Bhubaneswar: James Hiller, the head coach at the Reliance Foundation Odisha High Performance Centre, has a story to tell. It goes back to the time when the golden boy Neeraj Chopra wasn’t even a potential Olympic medalist. This was in Bydgoszcz, Poland, when Chopra was busy making himself count at the junior world athletics championship. “That arm,” remembers Hillier. The Bath-born former English hurdler was at the stadium, in the stands, part of Great Britain’s coaching team.

“I had heard about him because he was the record holder and I wanted to watch this guy. One throw, bang, done”. It was a prelude of sorts to what Hillier would watch again five years later, this time on television, when young Chopra would repeat the feat at the 2021 (2020) Summer Olympics. ‘One throw, bang, done’. “Like the fast bowlers of the West Indies,” says Hiller, clearly a cricket fan. “You should look at the kind of javelin throwers the Caribbean has produced. And the island has given us the greatest of fast bowlers. It’s all about the arm-speed,” he says. Years later, Hillier would get to meet Chopra again, when the Haryana-born came and trained for close to two-and-half-months at Bhubaneshwar’s athletics HPC between December 2020 and February 2021, before getting ready for Tokyo.

“The qualities he showcased when he was here – everything was coming from him. Nobody was telling him to do it, he was doing it himself. Yes, he had the coaches, the support-staff; but it’s him that wanted to do things right. “He was taking ownership of what he was doing, taking responsibility. Accountability for what he was doing. That’s what good athletes do. They take accountability, they make things happen. They surround themselves with capable people, good people. That’s what Neeraj has done”. At Kalinga stadium, ever since Hillier arrived here in November 2019, the 43-year-old has been focused on one this aspect more than anything else – search for excellence. “The Odisha government has set up a very good system and, backed by Reliance, you can see some very strong foundations being put in place. Hopefully, one can now build on this system. That’s what excited me when I was considering taking up this role,” he says.

In years to come, when he’s done, Hillier wants to retire in Bath, 11 miles southeast of Bristol in England and where he comes from, sit in a rocking chair with a pipe and a pint and look back proudly at something he managed to achieve. And what would that be in the present context? A legacy that he can build doing what he’s doing at the Kalinga, working with a group of very talented youngsters and an eye on the 2026 Youth Olympics. “When you take up a role like this, you want to create some sort of a legacy. So being associated with something right at the fundamental level, right at the start is something exciting. You will see success coming out of Odisha in the next few years,” says Hillier.

A prospect already in the making at the HPC is 16-year-old Sabita Toppo, a runner who prefers the hurdles ahead of other races she’s been very good at. At the 2020 sprint & middle-distance fest, Sabita was named the best female performer after achieving four personal best timings in six races, including three in her preferred event – 100m hurdles. Since joining the HPC in August last year, Sabita has now improved her timing by more than two seconds and clocked 14.54 seconds in her final 100m hurdles race at the competition. “I want to run below 14 seconds,” she says. Hillier is aware she can do it, probably go better than what she has in mind right now. Young Sabita comes from Sundergarh – that Odisha goldmine of talent – and is the youngest of six siblings.

At the junior national championships in Guwahati in February, Toppo was the standout performer, winning gold in the U-16 girls Long Jump and silver in the U-16 girls 80m hurdles. Toppo, who has been earmarked as an athlete of immense potential, leapt a distance of 5.59 metres in the Long Jump and completed the 80m hurdles in 11.77 seconds, eclipsing her previous personal best marks in both events. “That girl can handle pressure,” Hillier says. “And she loves to compete. She has a great ability to raise her level in competition. We’re taking a long-term view with her.” Another talent to watch is the young Amlan Borgohain from Assam who clocked his best in the men’s 200m at the recent 60th national open athletics in Warangal this month. Borgohain finished at 20.75 seconds, way ahead of the second-placed Nithin B from Tamil Nadu.

“There are three things any country or an ecosystem needs to be good at athletics. At least that’s what I feel,” Hillier points out. 1) Good coaching; 2) Competitions, lots of them; 3) Convenience and access. The HPC aims at working on these three aspects. Hillier further explains. Good coaching: Specialist coaches at all ages are a must. Needs of a 13 or 14-year-old athlete are completely different from the needs of a Neeraj Chopra at, let’s say, 23.

Competitions: There needs to be a very effective system of competitions. That’s where the US does amazingly well. They have a fantastic competition structure where they have universities pitted against universities. Their national championships are huge. And there are lots and lots of other competitions.

Let’s take India: The national championships are fantastic… good, big events and well-funded. The problem is, there are not enough smaller competitions. So, until you reach the nationals, you don’t compete enough, and that’s a big problem.

Core-convenience: What that means is athletics must be accessible to everybody. If anyone wants to go and try it, for anybody that sees Neeraj on the TV winning a gold medal and is inspired by that, they need to have an athletic track within a short distance of their home. Otherwise, they’re not going to be able to do it.

“Performance sport is brutal. Let’s not beat around the bush,” says Hillier. “It’s all about levels and participation is everything because that feeds the next level up at all levels. Look at a pyramid in that sense. You’ve got lots of kids doing loads of competitions and you don’t worry too much about whether they’re good or not. You just give them the opportunity. If they are good, they’ll keep moving up the levels until the best reach right there at the top. “You just make the base of the pyramid as big, as wide and as deep as possible. And then you just wait,” he adds. (TOI Inputs)